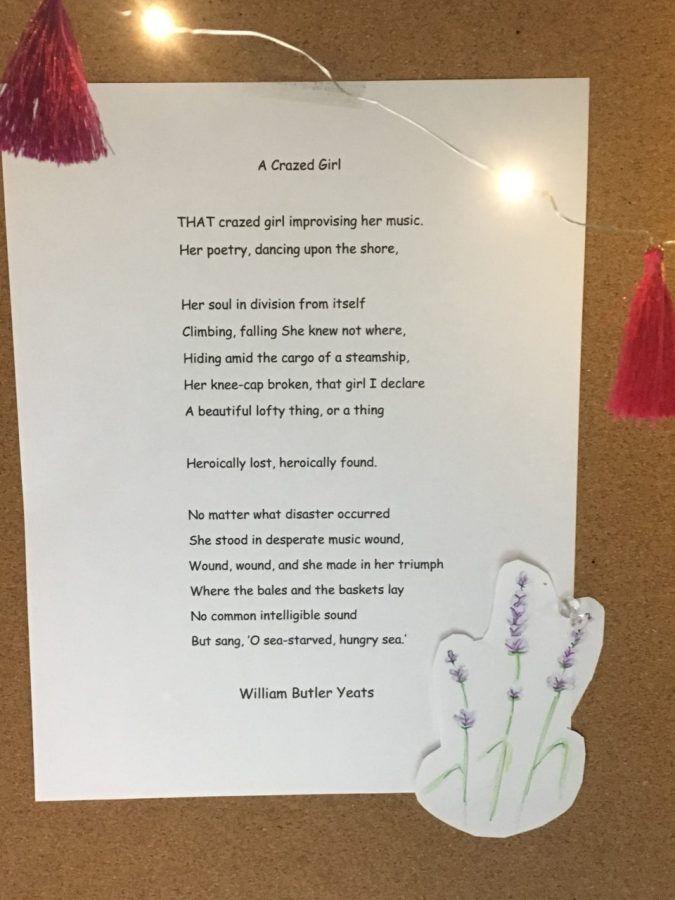 We all express our feelings in different ways, weather it is through singing a song, writing, or how we socialize with others. A popular approach is in poetry. Poetry is literature written in any form or pattern to express what you want to say. It’s like using a canvas to paint, but instead of the art supplies and brushes, you use your feelings and a pen. Poetry could be interpreted in many ways, which brings the reader to invoke intensive emotions.

A renowned poet, William Butler Yeats (1865-1939), wrote many poem collections. Yeats received the Nobel Prize of Literature in 1923. Most of his poems expressed his political views and romantic feelings. Yeats was an acclaimed poet and a major figure in Irish literature.

An underground poem written by Yeats is “A Crazed Girl” (which can be read here: https://www.poemhunter.com/poem/a-crazed-girl/). The poem could be interpreted as a young woman finding peace and serenity in singing. Her song resonates throughout the ocean shore, imagining her life with beauty and artistry against grim reality. Desperately, she holds onto the false hope of her life in the charming music she sings. The young woman hides on a steamship, hidden from the world and with the comfort of her song. Yet the bitter reality is that she’s a crazed woman taking shelter on a ship. William Butler Yeats wrote the sad reality of life.

Many poems could have a double meaning. Yeats told a story about a lively girl dancing on the shore. He doesn’t want the girl’s craziness seen as madness, but her way of escaping reality. The girl depicts a sense of bravery as she’s still standing against the hardships of life.

How did you interpret the poem?