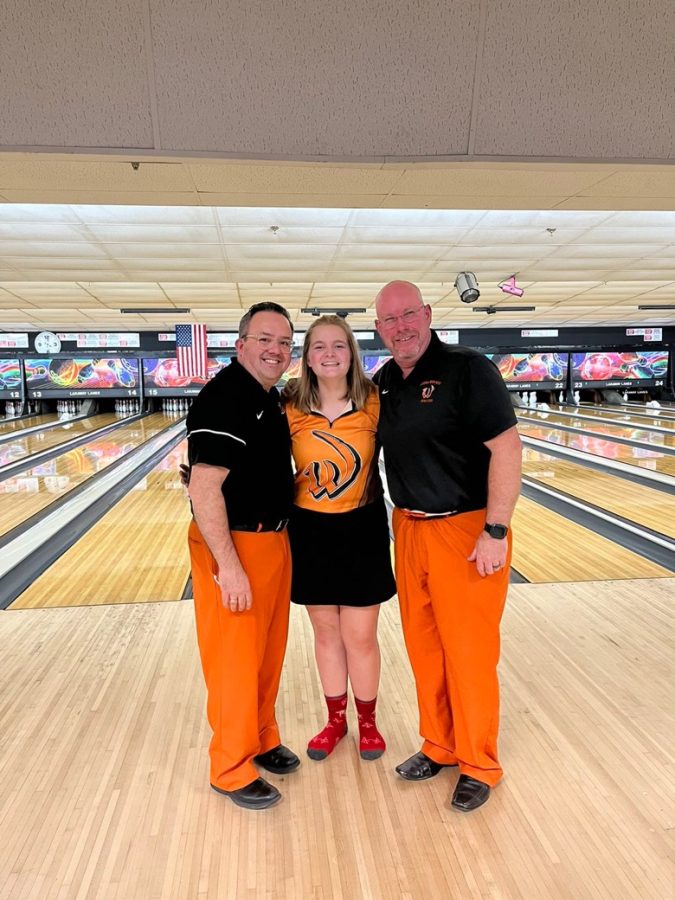 What makes bowling so fun?

The people, the memories I’ve created with my friends, and goofing around but still having a serious aspect

What is your favorite memory from bowling?

I have two favorite memories. The first one is from freshman year when we played in the Lincoln-Way Cup! This year was different from previous years because ties are not usual but that year we had a “bowl off”; there was a bunch of people watching, and we were surrounded on all sides.

My second favorite memory is from senior year when sometimes we would celebrate after matches by getting Wendy’s, and one time I got a cherry Dr. Pepper which gave me a sugar high, and the next thing I knew I was begging my coach to take us to the New Lenox Commons to see the Christmas lights. Our coach only gave us like five minutes to run around, but we took it. We ran out of the bus and ran towards the big Santa. Despite being absolutely freezing in our uniforms (because it’s a skirt), it was still one of my favorite memories.

What year of bowling was your favorite and why?

It’s definitely a tie between freshman and senior year. Freshman year because I finally felt established as a bowler, and I felt like I fit in somewhere. Then senior year because it was like my final chapter, and I felt as a senior I kind of shaped and molded my team. I made so many fun memories. Both years were great because I was in two totally different places in my life but in the end I loved both of them.

What made you start bowling?

I originally started at Liberty Junior High, and they had a bowling club there so I joined that, but it wasn’t really as serious because I didn’t own any of my own equipment. When I started to play freshman year, I felt a part of the team because I had my own ball and shoes. My parents always wanted us to be in one sport and one club. My sister played basketball, and I wanted to do something different so I decided to be the rebel child and do bowling instead.

What was your major highlight?

What is the most important thing you learned from bowling?

I learned that everyone’s different, and even though we all learn differently we’re all the same when we’re together and bowling. I also learned that you need to build a solid support system. You need a support system and your teammates and coaches will always be there for you. They also shape you and make you who you are.

What’s your first memory from bowling?

My first memory was at Liberty, and it was Maddie Kukulka, Abby Guillaume, and me, and we were the only girls in the club. We would always get red Icees and just bowl our hearts out. We made it to state, and it was such a fun experience because there was no pressure and we just got to have fun together.

Is bowling in your future?

I will always have a love for bowling, and there will always be leagues to join. As far as college I’m undecided.

How do you like to celebrate after a good match?

We go out and eat dinner as a team at either Wendy’s, Culver’s, or Chipotle, and my coach would drive our little white bus. We would blast our favorite music and sing the fight song.

Do you get nervous before tournaments?

Yes because at the tournaments this year I was the anchor, so if my team was falling behind it was my job to carry them back up.

Do you have any pregame superstitions?

I’m not sure if you would call it a superstition, but we always stretch as a team. And since we wear skirts, we always were fun socks. I even made custom socks for my teammates.

What is the greatest challenge you had to overcome?

My sophomore year, my dad passed away. He was my biggest supporter; it was hard not to see him in the stands. Bowling then reminded me of him all the time. My teammates were also a big support. I think that overall this made me more mature and more of a leader for my team.

What are your pump up songs?

What color is your bowling ball and why?

I have a bunch of different balls but my favorite ball is probably my 1st strike ball; it’s orange with some red, gold, and yellow in it.

What advice would you give to a freshman?

You’ll have bad and good games, but the best thing is being consistent; don’t give up because you’ll get there. If you work hard you’ll see the results.

Do you have a coach or a role model you look up to?

My two bowling coaches, Coach Ullian and Coach Prinn. Coach Prinn taught me to just do it and to have fun. Coach Yullian taught me wisdom and took me to the next level for bowling; he also played a solid male figure in my life after my dad passed away.

How do you feel your teammates and coaches would describe you?

I think they would say I’m a leader, and I’m the team mom; I’m happy, and approachable.

What do you want to be remembered for?

How did you feel at sectionals/state?

We got 2nd at regionals and 2nd at sectionals; it was a tough competition and the odds were against us. It was very nerve-wracking. We weren’t at our home turf so we had different alleys, and we wanted to keep our results a secret till the end. We ended up getting 4th in state, and I was pretty let down. I didn’t want to leave because then it would be officially over.

I’d like to thank both of my coaches, my mom for supporting me through my adventure, Maddie Kukulka because we’ve been through our ups and downs (and now I’ll always have a life long friend), and of course the rest of my team for always being there for me.